The Google Pixel 3a XL is a great mid-range smartphone with a high quality rear camera and a software support guaranteed for three years. 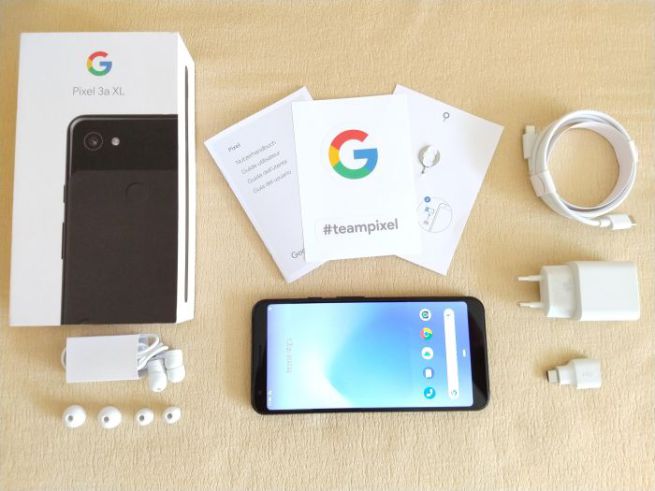 The Nexus series from Google was a great success, as it offered a great compromise between specifications and price. As of 2016, six high-end Pixel series models were announced with significantly higher prices. This year the Mountain View company wanted to “go back to basics” with the Pixel 3a and 3a XL. Although they belong to the mid-range, Google has integrated the same Pixel 3 rear camera, considered one of the best on the market. For this review the Pixel 3a XL (color Just Black) was used, but the final considerations also apply to the Pixel 3a (only the screen diagonal and battery capacity changes).

In addition to the smartphone, in the package there are the power supply for fast charging (18 Watt), the USB Type-C cable from a meter, the USB Type-A to Type-C adapter, the earphones with 3 audio jack , 5 millimeters, the SIM extraction tool, the user guide and two stickers.

DESIGN
The Pixel 3a XL has a traditional design, so no notches or holes in the screen, but rather obvious frames. The upper one houses the front camera, the sensors and the ear capsule. The lower one could have a lower thickness because the speaker is not present as on the Pixel 3, instead it is moved along the lower edge, where there is also the USB Type-C port. Along the top edge is the 3.5mm audio jack. The power and volume buttons are on the right side, while on the left side there is the nano SIM slot. On the back is the fingerprint reader (Pixel Imprint).
The cover is the polycarbonate, a less valuable material than glass (used for the Pixels 3) which has made it possible to reduce production costs. However, Google has retained the double tone: glossy for the upper part and opaque for the remaining surface. The latter perfectly hides the fingerprints. The smartphone does not have two features available in Pixel 3, ie IP68 certification and wireless charging. The notification LED is also missing, replaced by the Always-On Display feature. Dimensions and weight are 160.1×76.1×8.2 mm and 167 grams, respectively.

SCREEN
The Pixel 3a XL has a 6-inch OLED display, protected by Dragontrail glass, with full HD + resolution (2160×1080 pixels and 402 ppi). With the default settings (adaptive brightness and adaptive colors), the quality of the images and videos is excellent: natural colors, deep blacks and wide viewing angles. Good readability even in the presence of strong lighting.

CAMERA
The strong point of the Pixel 3a XL is definitely the rear camera with Sony IMX363 12.2 megapixel sensor, lens with f / 1.8 aperture, Dual Pixel autofocus with phase detection, dual LED flash, optical and electronic image stabilization. The photos taken in automatic mode are almost perfect both inside and outside, thanks also to the quality of the software developed by Google. Missing Pixel Visual Core dedicated processor, so all calculations are performed by CPU and GPU. There is only a small increase in processing times, but this does not affect the excellent final result.

The most stunning feature is Night Sight which allows you to take very sharp photos in low light conditions without a tripod or flash. In practice, several sequential shots are taken at different exposure values and combined into a single image. Thanks to Google’s magic algorithm, the camera sees better than the human eye.