Want a good glass of drink? How about one that you don’t have to hold in your hand? Yes, a levitating drink!

This is not magic – not some stuff you read in Harry Potter – just some pure science all created for the purpose of aesthetic.

Introducing the Levitating CUP designed by Joel Paglione in one of his attempts to discover novel ways to display drinks and increase their attractiveness – something which he found neglected in most restaurants which pay more attention to how foods are displayed. 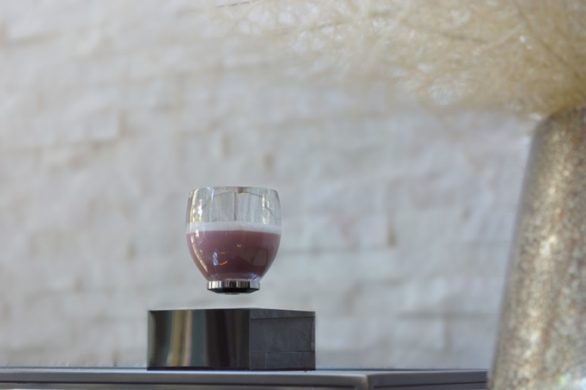 “I wanted something that could wow everyone… So much focus is on plating, on unique presentation in terms of food. I wanted to create something that would complement what restaurants are doing, and create a spectacle with the drink itself,” said Paglione in an interview.

In recent years, nitrogen cocktails, which is famous for its cloud of vapor, has risen in popularity across many celebrated bars and restaurant, so Paglione believes that there would be an eager audience for a whiskey floating in mid air.

What’s behind the levitating cup?

It is no rocket science, really. Just simple electromagnetic suspension technology. The Levitating CUP is kept aloft by a magnetic force at play between a special cup and an electrically powered magnetic base. The magnets in the bottom of the cup and the base repel each other, while the electricity in the base interacts with the magnetic field, stabilizing the cup and keeping it suspended in the air. 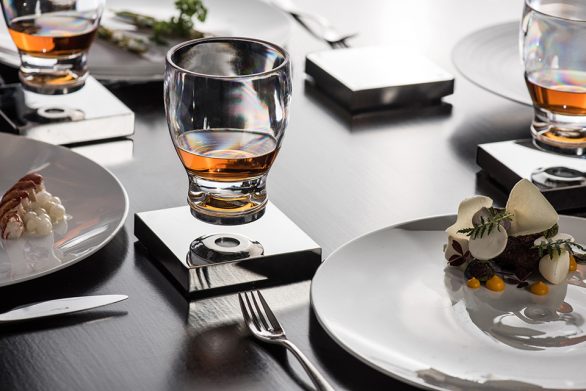 Suspending a cup in midair might take some practice, but once set in place, the cup balances well, even when being carried. To help users get used to the Levitating CUP, Paglione also designed a base attachment called Levitating Assist that provides extra stability until people get the hang of setting down a cup on an invisible surface.

Paglione is currently raising money for his creation through Kickstarter campaign which runs through August 19. Once the funding is secured, the Levitating CUP is expected to ship by October this year, so watch out for it!