The term fixie comes from fixed gear. In that sentence we find the two main features of these bikes: they just have one gear that is also fixed, which means the gear spins in solidarity with the chain and hence with the pedals. 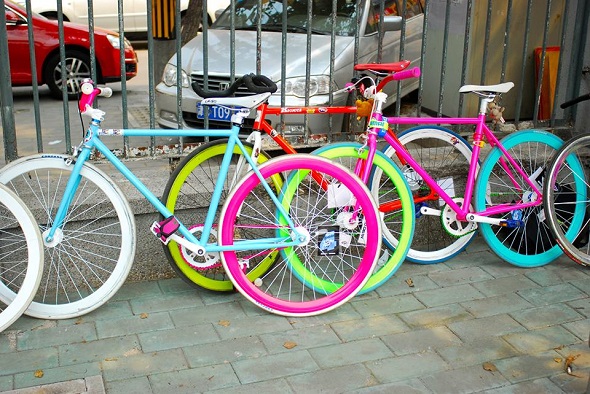 You can notice whether a fixie is there

In case it’s not clear: in a “normal” bike (note the quotes), if you stop pedaling the bike continues moving while you leave the pedals; you can even pedal backwards without it affecting the bike’s running! This is because the “normal” bikes have a freewheel mechanism that prevents the rear wheel rotation to spread to the chain. In a fixie, however, the fixed gear causes that all the movement of the rear wheel gets transmitted to the pedals (and vice versa, including backward pedaling). So, if you’re going downhill with a fixie, your feet will keep moving not for the effort you’re doing but by the movement of the wheel.

This system has almost as many fans as detractors. The advantages include greater lightness and simplicity for the lacking derailleur system and rear brake (you don’t need it cause you brake the rear wheel with the pedals). Those who love fixies also love the feeling of oneness with the bike that happens when your body paces the speed. Fewer parts also means less to pay (at least in theory), less to maintain and to be damaged and, ultimately, less to be stolen if you park your bike on the street.

Those who aren’t tempted by the fixie often speak disadvantages related to security, for that you have to be blocking the rear wheel every few minutes and the discomfort of not being able to stop pedaling at any time. Furthermore, in a fixie you only have one gear, so facing hard inclines can be pretty complicated. 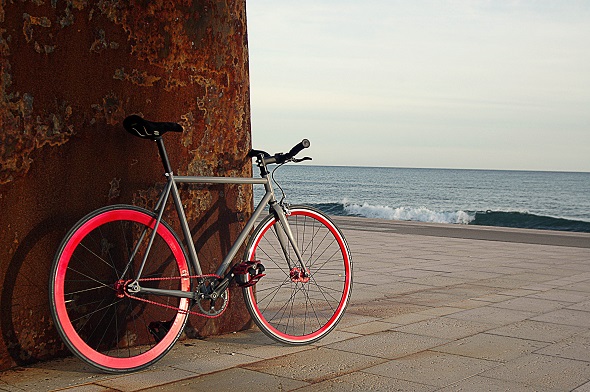 The nirvana of hipsters

The fixies owe much of their popularity to the iconic bicycle postmen in New York, who avoided the terrible traffic in Manhattan in their narrow handlebars and without brakes fixies (many people who seek the utmost simplicity don’t use front brake either in their fixie), balancing at the traffic lights (a track stand). It’s difficult to know if what works for a particular group, or to perform acrobatic adventures, is also suitable for any urban cyclist… surely the best way to know if fixies are for you is testing them.

The problem of price

Curiously, fixies’re usually not especially cheap. They have a very large component of “whim” and those who use them tend to see it as a long term investment, so it’s not surprising that the most common models exceed 1,000€. To avoid these high prices, many choose to craft their own fixies from old road bikes.